Get to know more about Siena College through the eyes of our alums. We asked a few recent grads to tell us about their favorite memory of Siena and their time here, and here’s what they shared with us.

"It is hard to determine what is your favorite memory at Siena, when you create so many of them! From late night pizza and study sessions, early morning breakfast with my besties, hypnotists, movies, to Sunday Funday, Siena had it all. I think my all-time favorite memory was the snow storm on Valentine’s Day in 2007. Class was cancelled and everyone was snowed in. We spent the day sleigh-riding on campus, drinking hot chocolate, and that evening the Friar on our floor invited us over for a chicken parm dinner. Having a home cooked meal was the perfect ending to an amazing day.” – Jade Litchfield, ’09

“My favorite memory was freshman year when my birthday coincided with Sienafest, our biggest event on campus. I wore a toga that day to go with the Sienafest theme 'Gone Greek' and lost the toga contest during Musical Mayhem, which is when all the bands on campus play. Even though I lost the contest, someone alerted the Student Council President and MC that it was my birthday and had a good portion of the school sing to me.” – Alyssa Tognetti, ’11 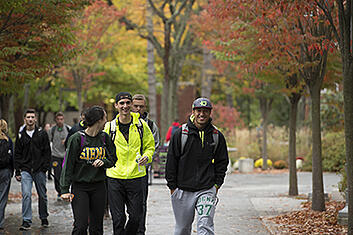 “My favorite memory of my time at Siena was probably playing intramural softball my junior/senior year with my friends. Most of us hadn't played baseball/softball besides little league and we were just plain bad. We made a joke out of it our senior year by naming ourselves 'Team Horrible' and just owning it. It was a great time though because games were Sunday nights so we would go, lose against whomever we were playing, then make 'family dinner,' watch Walking Dead or Boardwalk Empire or whatever we were into at the time, and just hang out. We were all different majors, with different involvements, and living different places, so it was nice to have this time to just catch up and have fun before the week started.” – Terrance Logan, ’12

“It would have to be sitting in the dog pound at the basketball games. The amount of spirit that was there was crazy. It was such a good time to go and have rides back and forth so you don't have to park. I would also have to say living in the new dorm as a junior and a townhouse as a senior. I made a lot of friends those years and had so much fun just hanging out with those people.” – Kayla O’Hara, ’12

“The amazing people I met during my four-year experience. I just went to my roommate’s wedding last weekend, and it was so fun catching up with many of my classmates that I had not seen in a while. Siena definitely attracts very special people from all over the country and world!” –Joan Paul, ’05

Want to see the kinds of things they’re talking about? Follow us on Facebook. We’re always posting special memories and what we’re up to on campus.