Q&A with Professor Snyder On Hip-Hop Week And More

With next week being Hip-Hop Week at Siena, it was only right to interview Professor Todd Snyder for part two of our faculty Q&A series. Originally from West Virginia, the often-raved-about English professor has been with Siena since 2011—and is the man behind one of our most popular courses, "Rhetoric(s) of Hip-Hop Culture." Learn about his course, being an English major at Siena, Hip-Hop Week (which is hosted by Student Life and the Damietta Center and includes events open to the public!) and more below. No dancing experience required. 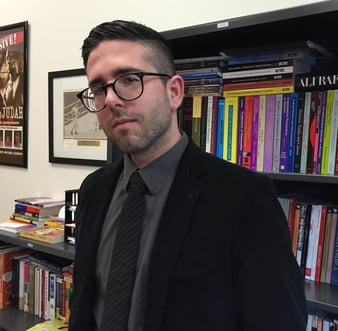 Favorite book: Bootstraps: From an American Academic of Color by Victor Villanueva

Favorite place to eat in the Capital Region: Saati Deli

Q: Tell us a little about your course, "Rhetoric(s) of Hip-Hop Culture." What made you start teaching it, and what's it all about?

I first taught the course in 2008, while I was working on my doctorate at Ohio University. The initial idea was to treat hip-hop lyrics with the same level of critical inquiry that scholars give canonized poetry. So, in those early days, students mostly wrote lyrical analyses of song lyrics. As the course evolved over the years, I have begun to focus more on hip-hop, as a culture. While I help students learn how to better locate and understand rhetorical patterns and argumentative trends in hip-hop music, my primary focus is helping students to better recognize the socio-political and cultural contexts from which those patterns are crafted and promoted.

Today, “Rhetoric(s) of Hip-Hop Culture” is much more of a cultural emersion experience than has ever been the case. We do much more than read hip-hop scholarship and analyze song lyrics. My students are given the opportunity to conduct research at Cornell University’s “Hip-Hop Collection,” meet Albany-area hip-hop artists and visit local recording studios. I have, of course, also been fortunate enough to have hip-hop legends such as Grandmaster Flash in my classroom.

Q: Siena's third annual Hip-Hop Week kicks off on April 4. For high school students who haven't yet experienced this week, how would you describe it? What do you have lined up?

This year’s event, sponsored by the Damietta Cross-Cultural Center, will be our biggest yet. We are going to kick things off on Monday, April 4th with a keynote lecture from Chuck D (of the legendary hip-hop group Public Enemy). The event will begin at 7:30 p.m. in Sarazen Student Union and is free to the public. Chuck D is, without question, one of the most important names in the history of hip-hop; he’s a Rock-N-Roll Hall of Fame inductee and a cultural icon. Students won’t want to miss this event. There will be plenty of other fantastic events that week as well: (1) a hip-hop photo exhibit; (2) an “open studio” event were students can learn about hip-hop production; (3) an open mic spoken word poetry night at Casey’s; (4) a Martial Arts film is going to be scored live by DJ 2-Tone Jones; and (5) we are hosting a screening of “Straight Outta Compton.”

Q: Aside from being able to teach unique courses, what else do you love about working at Siena?

I love getting to know my students. When I taught at bigger universities as a graduate student, I rarely had “repeat customers.” Here at Siena, I teach students two, three and sometimes four times. This allows for me to really get to know each student and to offer more specific feedback on their work and their career goals. I’ve also enjoyed serving as a faculty advisor to student clubs such as English Society, the Promethean and, of course, the Hip-Hop Club.

I want future Siena College English majors to know that our department works very hard to provide students with educational opportunities (both inside and outside the classroom) that will prepare them for the job market. More often than not, prospective English majors (particularly young men) are incorrectly told they are going into a major that doesn’t translate to the current economic climate. This could not be further from the truth. The writing, speaking, critical thinking and communication skills students learn in our major will set them apart from many job applicants. English majors work in a variety of fields. A degree in English does not relegate you to the poor house.

Q: And lastly, knowing prospective students are always thinking about life after graduation, do you have anything you could share with us about where some of your students have gone to work after Siena?