From Siena to NASA (and beyond)

It’s about time you meet a couple current students here on the blog. Why? Because they’re awesome, of course, but also because they have a unique perspective on what Siena College can offer its students. They’re in the heart of it, right now, going through the Siena experience. And if you’re still undecided about where you’d like to spend the next four years, their words could help point you in the right direction.

So first, meet Christina Nevin. She’s a senior biochemistry major from Canandaigua, NY, whose research work on “Investigations into the Energetic Processes of Peptide Bond Formation on the Prebiotic Earth” helped land her an internship at the one and only NASA. (Don’t worry, you don’t need to understand that title to succeed here!) 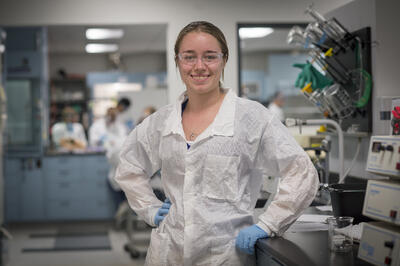 How do you feel about being a senior?

Christina: It’s a little strange! It’s actually my first time being a real senior, because I skipped my last year of high school to come here. It’s pretty cool to have that final ‘I’ve been there’ feeling and be able to pass on that knowledge and experience down to the underclassmen. I’m also just having a ball picking out my classes and not being worried about completing all my core requirements—so I’m taking classes I’m really interested in. I just started taking computer science for fun.

You entered as undeclared science major. When did you declare your major?

Christina: It’s kind of a funny story. I started out leaning more towards physics and math because I really liked those subjects in high school. But then I went to the undeclared science major talk during orientation. Dr. Weatherwax [Dean of the School of Science] listed off a myriad of different fields you could go into, and he mentioned the word “astrobiology” somewhere in the middle of that list…and it just stuck with me. I read up on what it was and found it to be such an interdisciplinary field that I wasn’t really sure where to start. So I brought my advisor a Wikipedia article about it and said this is what the field is, now what do I major in? He decided biochemistry would be the best fit, so I declared that, went for it, and now here I am.

How did you end up becoming a research assistant? Tell us about that project.

Christina: During one of my General Physics labs in my sophomore year, Dr. Hassel told about us some astrochemistry research he did in graduate school. It sounded really cool, so I stopped him at the end of class and asked him if we could meet sometime to talk about his thesis. At the end of that meeting, he told me that Dr. Weatherwax was talking about a project he wants to do and that he’d need someone with a chemistry background—and he told me he thought I’d be really good for it. So, I met with him, and after a one-sentence explanation of his project, he started me on research! It all began as a small group, but I slowly started bringing in different professors who I thought would be helpful. I planned meetings, ran meetings, did experiments, and I’m finally adding students to the project.

Now it’s really coming to fruition and it’s an amazing feeling. It was by the far the coolest experience. There are so many opportunities coming out of this project now that I never would have thought was possible. That one chance meeting opened so many doors for me.

Like your internship with NASA! You saw the opportunity and you went for it?

Christina: I actually wasn’t going to go for any internships because I wanted to stay and continue the project for the summer—that was "my baby!" But my professors encouraged me to apply for internships and gave me one to start my search. I only applied to that one. While I was waiting to hear if I got it, one of my research professors told me “part of me really hopes you get it, part of me really hopes you don’t!” When I got the email saying I got it, the first thing I did was ran down the hallway to find him and Dr. Weatherwax.

So when the time came, I wrapped up my project here, tied up some loose ends, and went down to NASA. The first day was just crazy. They have the most amazing labs. I called my mom after being there for a week and I said I found where I belong. Everyone there spoke the same language, and it was my language. My mentor there was incredible, and my entire lab down there became my lab family. I miss them a lot! My mentor is actually writing a recommendation letter for me for graduate school now. I’m looking forward to keeping ties with NASA and going on to graduate school research.

If a prospective student asked you what your favorite part about the chemistry department was, what would you tell them?

Christina: The personal relationships. You really get to know all of your professors—and you don’t just work for them, you work with them. They really trust you. I couldn’t have done what I’ve done without that trust. They’re also always available, even when they don’t have office hours! I couldn’t have done this without my professors. I can’t thank them enough, but I can make them proud.

Inspired? Ready to see what doors Siena can open for you? Start your application today. And come back in a couple days to meet another student!