Three internships down, one to go... 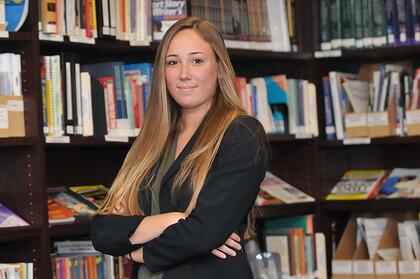 The college you eventually enroll in should open doors for you. It should prepare you for your career, but also for your life. Wondering if Siena can do that for you? Anyone who works here would be happy to tell you all the ways it can (and we probably have already), but today, take it from a current student who’s in the thick of it all. In this post, our second student profile, meet Megan Brousseau.

Megan is marketing major and a member of the Class of 2015. You want to talk about doors? She told us “The amount of doors I’ve had opened because of my Siena classes and experiences are unimaginable. I’m so grateful.” Here’s what else she shared with us about her time at Siena…

How’d you come to enroll at Siena?

Megan: Growing up, I’d always known about Siena because my mom works there—but being from a small area and part of a small high school class, I thought I wanted to go to a big university, somewhere far away. So I applied to several schools, including Siena (my mom wanted me to!) and started touring them. That’s when I realized that big schools weren’t for me, so I ended up visiting Siena. I’d been on campus before, but that was the first time I walked around and really looked at it. The size, the community, the small classes, everyone being so friendly—I finally realized, okay, this is what I really like. And I’ve been happy here ever since.

You’ve had three internships so far! Tell us about those.

Megan: All my internships were different experiences that helped me point me in the right direction of where I want to go in marketing and business and also showed me where I don’t want to go—but all of them were great. The first one was with a ski resort, where I had to develop surveys and implement them right on the ski slopes. I’d then put together a portfolio of my results and present it to the team. The next one was at a real estate/insurance agency. It was interesting to get some background in that field and see a different avenue of business, and while it made me realize I didn’t want to explore that field further, it did help me see that I really did want to go into marketing and business. So, after that one, I declared my marketing major.

My next internship was with Target at their distribution center, which I had heard about through the Career Center at Siena. It was a 10-week program over the summer, so I actually lived here on campus. That was a really good learning experience; I learned a lot about business and also just about being a leader. There was a team of about nine men who were engineers…and I was their manager! It was intimidating at first, managing men who were double my age and had been doing this kind of work their whole lives, but I had a great mentor there who coached me through it. And by the end, I had such a great relationship with these guys.

And they offered you a full-time position, right? That you turned down?

Megan: Target offered it to me before my internship ended, and it was such a tough decision to make. I made a pros and cons list, and the day before the deadline, I still hadn’t decided. There were so many pros, and I loved the experience and the internship—but I wanted to experience other things first. I’m not ready to settle until I’ve experienced what it is I really want to do, so that was the main reason I said no. It was the right decision, and they understood it. They actually told me to keep in touch with them.

What’s next for you?

Megan: I definitely want to attend grad school eventually, but I have another internship starting in January which I’m really excited about. It’s at Lift, an event-marketing agency, and I found that one again through the Career Center. I was blown away by the company, everything they did, and hopefully that will lead to something, too.

What would you tell prospective students who are considering Siena?

Megan: Siena really wants to help their students. They want you to get as much experience as possible and really want you to come out of Siena going into the field you want to go into. The amount of doors I’ve had opened because of my Siena classes and experiences are unimaginable. I’m so grateful.

Your turn to explore a range of internships and experiences! Have you visited Siena yet?