One of the many great features of this blog is our Q&A sessions with impressive Siena alumni. We know how important it is for students to know where our graduates end up—and we love to catch up with them! This month we chatted with Jim Scully ’87, an English-major-turned-COO (of J.Crew, might we add!). Want to know how his education from Siena helped him get there? Read on.

You started out as an English major. Did you know you’d end up in business? 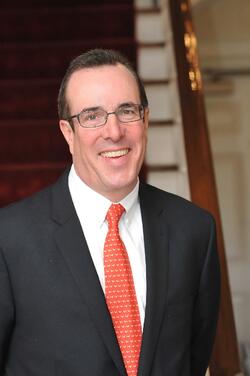 I actually never took a business class at Siena, so I did not think I’d wind up in business. I didn’t really know what I wanted to do, so I explored a variety of subjects like sociology, psychology, English and history. A lot of my friends were business majors, accounting majors or biology majors. They were so predetermined in what they wanted to do, which was exciting for them. But for me, being ROTC, I knew I wasn’t going to go into the workforce right away, so I wanted to have the opportunity to build a broad base.

When did you get into financial planning?

I spent about six months in the military, which is really important—I actually wanted to go into banking because of their training programs. I felt that foundationally I had analytical skills, but I knew I needed to get more practical experience in business. I took a job at a bank, worked hard, and met a lot of people. From there, I got called up for Desert Storm for six months. I came back, applied for a job as an investing banking analyst, and wound up getting the job. That’s where it all started.

Could you apply what you learned at Siena to banking and the places your career took you from that point?

Yes. Today, everything is changing so quickly—politics, business, all industries. People are realizing that they don’t know what competencies are going to be relevant three years from now. So, the military coined a term; it’s a new buzzword, VUCA—volatile, uncertain, complex, and ambiguous. What it really means in a professional sense is a person’s ability to learn. Do they have the potential, the fortitude, the determination, and an insatiable curiosity? I think those are fundamentally what you learn in liberal arts. A recruiter wants to know: who’s the most trainable, who’s the most flexible thinker, who’s the most analytical, who can learn the best? Because we don’t know what’s going to be relevant, it’s a great idea to spend those four years exploring a broader academic experience.

That said, Siena was really with me on each of those steps in my career. It set me out on the right direction back when I was 17, and stayed with me.

Do you have any advice for prospective students?

The benefit of a liberal arts education in a Franciscan community is the ability for you to experiment and learn all different areas—and there’s no downside to that. A lot of people think they can’t be successful in business unless they have a business degree, or that they have to be an English teacher with an English degree. They should realize that you can be successful in business, no matter what degree you hold.

Without giving it too much thought, what’s the first word that comes to mind when you hear Siena?

The first thing I think of is Franciscan, then liberal arts. I would also say underrated. I think back to the guys I hung out with who were normal college students having a normal college experience and it’s pretty impressive where they are now—Bank of New York, PwC, even a sports doctor for the Giants. He was my roommate!

Want to experience Siena’s Franciscan culture for yourself? Plan a visit to our campus. (And maybe check out the J.Crew in Crossgates Mall while you’re here…)